As a nutritionist and as a foodie I was very excited to attend the first ever Halal Food Festival, which took place at Excel London from Friday 27th September 2013 – Sunday 29th September 2013. I was very excited to see the different food and drinks they had to offer under the ‘halal’ category. As a Muslim, dietary requirement is a very important factor when planning, preparing and choosing meals.


I went on the Saturday with my cousin who is also into food like me! We made sure we got there early so we could browse the exhibitions before the afternoon rush, (which there definitely was after about 12pm). There were pancakes, falafels, steak, burgers, sushi, juice bars, mocktails and way too many cake/cupcake stalls. Although, one cake stall did stand out for me, which was The Creative Kitchen. They offer Asian fusion flavoured cupcakes like, mango and coconut, pistachio and cardamom and saffron. They were YUM!

Halal food is lawful foods for Muslim, as the meat products are slaughtered in a certain way. However, there are different standards to halal food and there are certain laws and regulations to differentiate between them, that is why there are different approval systems, such as Halal Food Authority (HFA) and Halal Monitoring Committee (HMC).

I tend to eat HMC approved meat products and there were no restaurants at all selling to this standard, therefore I had to stick to the vegetarian option which was a falafel wrap. It was a shame that I went to such an exhibition set out for the halal community but I didn't get to have any halal meat. Although, there was one stall selling HMC approved frozen burger packs that were providing samples of their products. And the other HMC approved stall was a sweet stall, and as a nutritionist, they didn't really appeal to me.


Understandably, as it was their first event, I do feel that they have some things to work on, there were bound to be some teething problems, such as the rush of people in the afternoon it was really hard to walk around and some of the food stalls had long queues which blocked up the walk ways. For next year they could have a wider selection of food with at least one stall selling HMC approved food (please!). Also, they could have offered a goody bag for every entrant, which is usually standard when you attend an exhibition, especially when you pay £20 for admission. (I don’t feel I got my money’s worth). 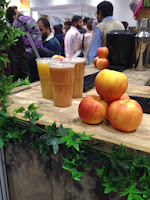 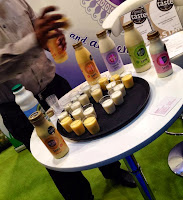 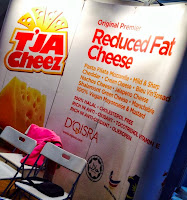 It wasn't all bad, the thing I did enjoy were the cooking demos, I saw Rachel Allen and Ali Imdad (from the Great British Bake Off 2013)! It was good to see the famous faces and see them demonstrating a recipe. Also, they had a cooking school which was interesting to watch as the public got to take part in a little competition making something and getting it judged by the professionals.

Overall, I did have a good day, sampling non-meat products like, cheese, honey, salsa, bread, lassi and chocolates (dark chocolate of course!). There were other non-food stalls too, like jewellery, canvasses, skincare products and clothing.

Let’s just put it this way, I went to the Halal Food Festival and I brought a ring! (A very beautiful ring from Sultanesque).

Would I go again next year? Ummmm, maybe. I would think twice about it, depending on the price and would look at their exhibitors list properly. Who knows, maybe next year I may even hold my own stall!

Did anyone else go? Would love to hear your experience too, comment below!

www.ahnutritionist.co.uk
A H Nutritionist
10th October 2013
Posted by Unknown at 09:00